Our beliefs closely match other Protestant denominations. What sets The Salvation Army apart from the churches you may be familiar with is our passion for the down-trodden of society, and our efforts to reach out to those in need.

William Booth, the founder of The Salvation Army, was a street preacher who worked tirelessly to share the message of Jesus Christ with people who had lost all hope. However, he found that these same people were not welcomed into the churches of his day. Frustrated by this, he formed his own congregation, meeting in tents and city streets. 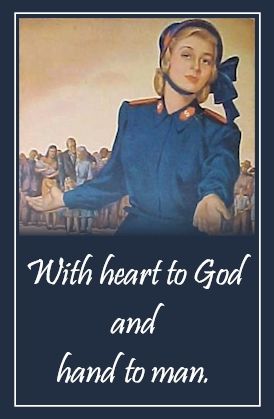 Working in the poorest neighborhoods of London, Booth and his followers were constantly exposed to the needs of the people around them. Starving, dirty, and homeless people, with no hope for employment, filled the neighborhood. As a follower of Jesus Christ, Booth knew he had to care for these people.

Out of these days, programs to feed the hungry, clothe the naked, and provide shelter to the homeless were formed. Orphanages, clinics, and hospitals were opened. Schools and even factories were opened, providing education and employment. William Booth and his Salvation Army sought to meet peoples' needs.

Yet people need more than just food, clothing, and shelter. Jesus Christ brought a message of hope beyond those basic needs. Taking every opportunity, The Salvation Army seeks to share this message of hope with those we serve.

Thus, alongside the social programs and services, The Salvation Army provides spiritual programs as well. Worship services and Bible studies are held weekly. Pastoral care is available to members and non-members alike.