Last year, businesses and community leaders from Ulster county volunteered their time, raising $57,000.00 for The Salvation Army in Kingston.

This year, the need is much greater.

The funds raised support programs and services of The Salvation Army for people of Ulster County. 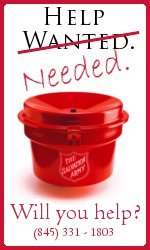 Volunteers are needed again this year to ring bells at kettle stands, beginning Friday, November 25. Kettle stands are generally set out from 10 a.m. through 7 p.m., Mondays through Saturdays, manpower permitting.

Volunteers may sign up for a shift as short as four hours, and are encouraged to sign up with friends or co-workers to cover multiple shifts.

Community groups are also needed to "Adopt a Kettle", providing bellringers at kettles for longer periods.

In 1891, a Salvation Army captain in San Francisco resolved to provide a free Christmas dinner to the area's poor. But how would he pay for the food?

From his days as a sailor in Liverpool, England, the captain remembered a large pot, displayed on the Stage Landing, called "Simpson's Pot," where passerby would toss charitable donations. The captain presented his idea to city authorities and received permission to place a similar pot at the Oakland ferry landing at the foot of San Francisco's Market Place. In its conspicuous position, the pot drew the attention of people going to and from the ferryboats. Another urn, in the ferryboat waiting room, also attracted donations. Thus, Captain Joseph McFee launched a tradition that spread throughout the United States and then around the world.

By Christmas 1895, thirty Salvation Army corps in the West Coast area used the kettle. That year, The Sacramento Bee published a description of the Army's Christmas activities and mentioned the contributions. Two young Salvation Army officers, William A. McIntyre and N.J. Lewis, instrumental in the original use of the kettle, took the idea to the East Coast. In 1897, McIntyre prepared his Christmas plans for Boston around the kettle.

Other Army officers did not want to participate for fear of "making spectacles of themselves." Nevertheless, McIntyre, with his wife and sister, set up three kettles on Washington Street in the heart of the city. That year, the kettle effort in Boston and other locations nationwide resulted in 150,000 Christmas dinners for the needy.

In 1898, The New York World hailed The Salvation Army kettles as "the newest and most novel device for collecting money." The newspaper also observed, "There is a man in charge to see that contributions are not stolen."

In 1901, kettle contributions in New York City provided funds for the first mammoth sit-down dinner in Madison Square Garden, a custom that continued for many years. Today, families are often given grocery checks or food baskets so they can prepare dinners at home. The homeless poor are still invited to share holiday dinners and festivities at hundreds of Salvation Army centers.

Kettles now are used around the world, including Korea, Japan, Chile and Europe. Everywhere, public contributions to the kettles enable The Salvation Army to bring the spirit of Christmas to people who would otherwise be forgotten - the aged and lonely, ill, poor and disadvantaged, or inmates of jails and other institutions. 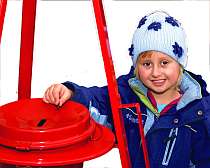 In the United States, The Salvation Army annually aids more than 7 million people at Thanksgiving and Christmas. Kettles have changed since that first utilitarian cauldron in San Francisco. Today, some kettles have such devices as a self-ringing bell, a booth with a system that broadcasts Christmas carols, even the capability for donors to use credit cards!

Self ringing bells and credit card scanners have yet to reach Kingston, where The Salvation Army still uses traditional volunteer "bell ringers" to staff its kettle stands.